Fairy tales are timeless for a reason. They lasted as an oral tradition hundreds of years before they were ever written down. Several cultures even have different variations of the same fairytale, such as Snow White and Cinderella. It is interesting to see how fairy tales have become more prevalent in the media.

Disney movies seemed to be the only one capitalizing on the the market of fairy tales for the longest time. Now, it seems to be everywhere. Movies like Hansel and Gretel: Witch Hunters, Jack The Giant Slayer, and Red Riding Hood have been released within the last 3 years. TV shows such as Grimm and Once Upon a Time rake in ratings every week.

And I love it.

As a kid, I was a huge Disney fan. I love the princesses and princes falling in love. But there was not a whole lot of variations of fairy tales as I was growing up. You either had Disney or you could plop down with a huge book of Grimm’s Fairy Tales*.

In theme with their movie and television counterparts, more and more books are also doing their own twist on fairy tales. I wish there were as many books based on fairy tales now compared to when I was growing up. Luckily, there were a couple of key books in my young adult life that kept my love for fairy tales alive.

Ella is about a girl who has the “gift” of obedience given to her at birth by a ridiculous fairy. If Ella is given any direct order, she has to obey, no matter how much she doesn’t want to or how ridiculous it may be. She lives in a rich world of ogres, giants, fairies, and gnomes. Despite her curse, Ella is funny, charming, compassionate, and clever. Through her mother’s death, father’s remarriage, and obedience school, Ella falls in love with Prince Char and seeks her own fate to break her curse. It has such a great twist on the Cinderella story, and the main characters are so well told.

There was a movie version done of Ella Enchanted starring Anne Hathaway and Hugh Dancy, but the book and movie are so different from each other that I don’t think it’s worth doing a comparison. I will say that I enjoyed the movie, but not in the same way that I enjoyed the book.

Zel – This book is why my second favorite fairy tale is Rapunzel and why I was overjoyed when Disney finally made Tangled. The author Donna Jo Napoli has other great novels based on fairy tales, but Zel was my favorite. It is also one of the first books I ever read written in present tense.

Zel follows the story of a girl who is taken care of by a witch. As the girl grows more beautiful, the witch becomes more jealous and eventually hides her beauty in a tower. One of the great things about this book is that it changes perspective: Zel’s, the young man’s, and the witch’s. I really appreciated the witch perspective, because that is part of the fairy tale which doesn’t make sense to me. Why would a witch basically kidnap a child? In Zel, you learn the witch is so desperate for a child that she takes the opportunity to barter for one. When Zel starts to fall in love with a man, the witch is terrified Zel will leave her alone and builds the tower. The witch was an interesting character and you almost feel sorry for her.

Zel is a beautiful rendition of the Rapunzel fairy tale. Rapunzel is really a darker fairy tale (compared to Cinderella), but Zel balances it well.

Once Upon a Time series – Before it was a TV series, it was a set of independent books that retold fairy tales by different authors. I caught onto them in high school and I was obsessed with them, to the point where I looked them up online, bought them the day they came out, and continued to buy them into my early 20’s. Alas, they no longer make them. Oddly enough, they were not always that good. There were a few really good ones in a series of so-sos and sup-par. The reason I really liked them was to see what the author did to the retold fairy tale.

A couple of my favorites was Sunlight & Shadow and Snow. Sunlight and Shadow is actually based on the opera The Magic Flute (which I still haven’t seen). Snow is obviously based on Snow White and was the first one I read. Most likely, if I had not read Snow first, I might not have bothered with the rest of the series. It shows you how desperate I was for retold fairy tales.

I enjoy the new twists and spins that fairy tales are being given nowadays. It gives new life to the fairy tale that it was based on. The old stories get a new chance to live on.

*Don’t get me wrong! I love the classic fairy tales. I specifically took a class in college to study and discuss fairy tales. But no kid wants to sit down and read 209 tales, especially when half of them aren’t even that interesting.

One of my favorite books of all time is Jane Eyre by Charlotte Bronte. I like to call it “the book that doomed me to become an English major.” It feels like I read it for the first time only yesterday. I remember vividly being 16 and spending my summer days at my grandmother’s house, enjoying the cool air conditioning to avoid the 100 degree heat outside and physically not being able to put the book down. I remember falling in love with that book and rereading parts of it over and over and over again all summer long.

I was ecstatic when it was assigned reading in college 5 years later. I was worried that maybe it wasn’t as good as I remembered and maybe I changed too much to be able to appreciate it the same way. Luckily, it wasn’t the case. I felt like I was 16, falling in love with the book all over again. I passionately defended the haters of Mr. Rochester in my English class, to the point where the teacher pulled me aside and told me to tone it down. The scene where Jane has to leave Mr. Rochester breaks my heart. Every. Single. Time. 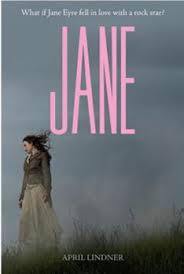 For those who don’t know the story of Jane Eyre, it is about a character named Jane Eyre and basically her life story. She is an orphan who is raised by her horrible aunt and mean spirited cousins. Her aunt ships her away to a religious school which ends up being just as terrible as her aunt’s. Despite it all, Jane grows up to be a pious, kind, caring, intelligent woman although often described as plain. She goes to work as a governess for the mysterious Mr. Rochester and then things start to get really interesting. Jane Eyre is a classic gothic fiction novel but also a love story woven in.

The novel Jane by April Lindner is a young adult modern retelling of Jane Eyre. Jane Moore drops out of college after the death of her parents to be a nanny employed by the mysterious, brooding, rock star Nico Rathburn about to make his comeback. I was dubious by a modern retelling as Jane Eyre is really a piece of literature that exists in the time period it was written for. I was convinced by my friend’s book review and decided I had to check it out  myself.

To give you an idea of how much I enjoyed this book, I started it late at night planning to only read a couple pages and instead finally went to sleep at dawn. I thought a successful modern interpretation of Jane Eyre would be impossible, but I was wrong. I loved it. Mr. Rochester as a modern rock star was ingenious and modern Jane was smart, strong, and endearing. I spent most of the book waiting to see if it was going to let me down in someway, but it never did. It gave me my Jane Eyre fix in a condensed, easy read version. I would rate it 5 out of 5.

I was excited when I learned a new move interpretation of Jane Eyre was being released in theaters. I really enjoyed the Kiera Knightly version of Pride and Prejudice and hoped it would be as good. I was devastated when I missed it in theaters, but added it first thing to my Netflix queue.

The movie starred Michael Fassbender as Mr. Rochester and Mia Wasikowska as Jane. I enjoyed the movie. I thought Mia embodied the awkwardness and plainness, but as well as the determination and strength of Jane. I wasn’t convinced with Michael’s portrayal of Mr. Rochester, but I thought he had good chemistry with Mia. Their interaction and banter were lines right out of the book which I enjoyed. The scenery for the movie was also beautifully done. The landscape and isolation of Thornfield was demonstrated well visually.

One of the really odd things about the movie was that it starts when she is leaving Mr. Rochester which is right in the middle of the novel. The timeline of the movie was very confusing in the beginning and shows a bunch of flashbacks. It picks up for awhile when Jane and Mr. Rochester meet and then becomes very confusing again when she leaves (which is where the movie initially started). For someone who might not be familiar with the story, they could get very confused. I have read the novel in it’s entirety at least twice and I was even confused at times.

The ending was very abrupt and unsatisfying, which I felt unnecessary as the novel has a complete ending. I also think the movie running time was a little short for the very lengthy novel to give it the depth that it needed. Despite those issues, I still enjoyed it and thought certain parts were done very well. I would rate it it 3.5 out of 5.