I was very excited when I got access to this book. I have read Geraldine Brooks’ March, which is the story of Mr. March from Little Women while he is at the war. I really enjoyed her taking a character and giving a new voice to him. I knew most of the basics of King David’s story, so I was interested to see her take on it.

The book is from the perspective of the prophet Nathan and David is already King. Nathan is chronicling David’s past from speaking with others from his past, getting stories of his childhood, his defeat against Goliath, and becoming close with King Saul. Nathan is also recalling his past with King David, as he met David as a child who’s family had been killed and began prophesying. David spared him and brought him into his royal court. The current time of the story is right before David commits his grievous sin of adultery.

From the description, there are a lot of jumps in time. At times, this made the book very confusing. Sometimes it wasn’t clear if Nathan was speaking with someone or if he was recalling his own memories. Some of the interviews he had and his own memories overlapped. Once the story caught up with itself, it read a lot easier.

Overall, I thought Brooks’ did a great job depicting the story of David, the man. She paints David as passionate and fiery, but also deeply spiritual and poetic. I loved that she often brought up the music and songs David created. It fit very well with scripture as he is known to have created most of the book of Psalms. Although the timeline was confusing, I liked the story’s perspective told from Nathan. It allowed Brooks to give a more honest portrayal, as he foresaw what was to come.

One of the strengths of the book was Brooks’ portrayal of the female characters, such as David’s mother Nizevet, his first wife Michal, and Bathsheba. Each of them was mistreated in a way or cast out by their husbands, as wives were treated like property. They shared their story with Nathan, and he expressed sympathy for each of them. However, these three female character were not depicted as weak. They were still strong in the ways that they could be strong. I appreciated that they were all given such a strong voice where most Biblical women do not have one (not counting Esther and Ruth).

One of the downsides of the books was the violence and language. I expected most of the violence, since the Old Testament had a lot of war. David fought lots of battles to gain his kingdom, and they were very gruesome. I prepared myself for that. I did not prepare for the very violent incest/rape scene. I am usually not squeamish, but I had to set the book down for a second to keep reading. I didn’t think the scene was necessary in that detail and greatly impacted my feelings on the book.

I also did not expect the profane cursing. I understood what Brooks was trying to do. David’s men were soldiers and they probably had their languages’ equivalent of dirty slang and curses. But I couldn’t handle the use of ‘f***’ in the context of the book. That wasn’t a word that was even created until the 15th century. Using modern curses for a story set in David’s time just didn’t work for me. She should have been more creative then that.

Overall, I would rate the book 3 out of 5. The book had great moments and the writing was still very strong, although I don’t think it is Brooks’ best work. 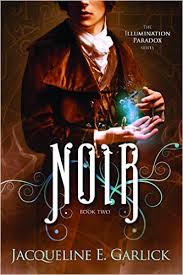 This review contains spoilers from the first book in the series, Lumiere.

After I requested Lumiere, I realized that Noir, the second book in the series, was available for review as well. I decided that I would read them both. I had not read Lumiere before I requested Noir. If I had,  I would never have requested Noir from NetGalley.

Although I struggled with the plot in Lumiere, there was parts I liked about it. I hoped that the second novel was an improvement from the first. Unfortunately, I think the second book was worse. I almost did not finish it (and I never, hardly ever not finish a book).

One of the biggest issues I have with this book is the movement through time. These characters are supposed to go through full days in their adventures, but they seem to be awake for all hours of the day. When do they sleep? When do they eat? Although the story seems to be jam-packed with action and constantly moving, the characters need to be able to sleep and eat to have their adventures. It makes the characters more believable. Another issue with timeline was the day of the week. The novel started on Thursday, then suddenly it’s Sunday, and then somehow Saturday again? For an adventurous novel, there needs to be a really strong timeline to be able to follow.

The first novel had only Eyelet’s and Urlick’s perspective, but Noir had 4 different perspectives. There was just too many. It also became obvious that one of the perspectives was a secondary character and only used because one of the main characters was captured. It was very jarring to add a 4th perspective in the middle of the story.

Speaking of secondary characters, they seemed to be the only character of any intellect in this novel. All of the main characters kept doing REALLY stupid things like walking in somewhere they shouldn’t be and then getting captured/almost captured/almost caught/almost killed, and EVERY time the secondary characters would tell them ‘NO, don’t do it/let’s leave/this is a bad idea/we should go” And EVERY time the main character was like ‘it will be fine’ and then it wasn’t. Urlick and Eyelet are supposed to be brilliant inventors, but they continued to get themselves in very terrible situations for stupid reasons. It became very frustrating. It was one of the big reasons I stopped caring about Urlick and Eyelet in the second book.

Overall, extremely poor world building, loosing the essence of these characters, and awkward movement in time resulted in a rating of 1 out of 5. It would have redeemed itself if the characters were stronger and the story was more compelling. Unfortunately, this wasn’t the case.

The world has plunged into darkness after the Night of the Great Illumination which has changed the landscape of the world. Eyelet is on the search for her father’s machine, the Illuminator, which is supposed to help cure her affliction. She discovers the machine only to find someone has stolen it, the mysterious Urlick.

I fell in love with the gorgeous cover of this book and it was easily available to review. It started off with a really great beginning in a steampunk world with a smart, strong heroine in Eyelet.

Then the rest of the book followed.

After Eyelet met Urlick, she suddenly seemed to become a needy, whiny idiot who couldn’t do anything for herself. She jumped to the craziest conclusions about the mysterious things happening around her, with no evidence what so ever. The mysterious events in the house were really mild but Eyelet’s imagination went crazy and resulted with her running out of house into poison fog. Where did the smart, strong heroine go?

I liked Urlick’s chapters and I wished they happened more often as I got more and more annoyed with Eyelet. Urlick initially has feelings for Eyelet right away, but Eyelet’s feelings seemed to come out of no where. At one point in the book, she even tried to jump his bones which seemed really out of character for her very protected upbringing.

The world building became very muddled as more and more different kinds of beings were created; ghosts that act like zombies, witchcraft, shapeshifters, and criminals that acted like cannibals. It was all very confusing. At first, none of them could be defeated and then somehow they were immune to certain things once the characters faced them.

That was a big problem with the plot. A lot of quick fixes that didn’t make sense. A talking raven can’t talk, and then suddenly is able to talk again when it was most convenient to help Eyelet. There is no proper explanation for this. Similar plot holes happened A LOT.  It was as if the writer couldn’t figure out how to fix her own issues, so magically made them go away.

I will admit there was some great moments when characters explained the steampunk machinery of their world. I also really liked Urlick and Eyelet together, as they had some cute moments.

Unfortunately, the world building was all over the place and the plot was a mess. It honestly read like a rough draft of a novel that needed more fine tuning. Not sure how I am going to get through the second book. What a disappointment. I rate it 2 out of 5 stars.